made for Business as usual at The Crossley Gallery, Dean Clough Mills, Halifax 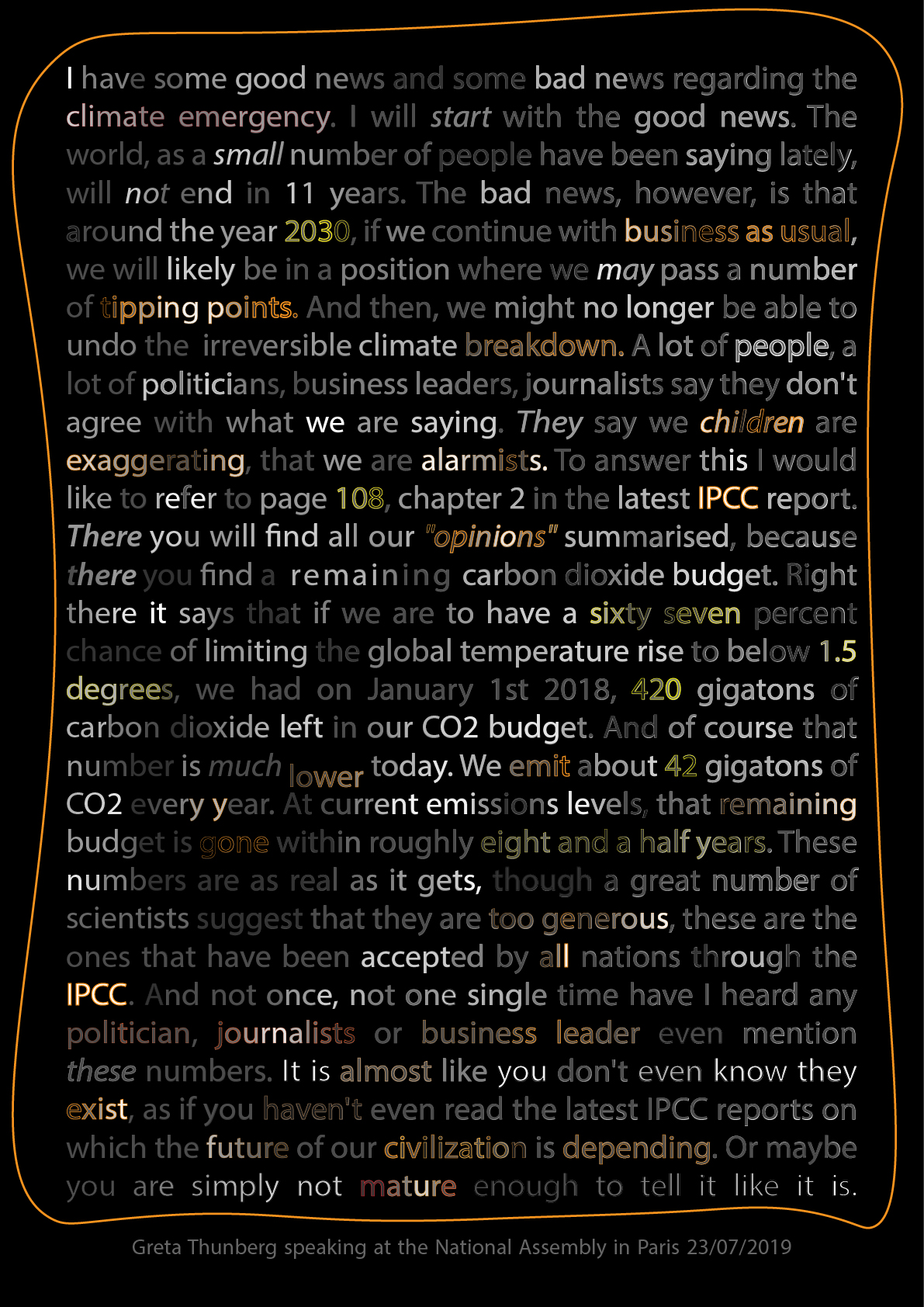 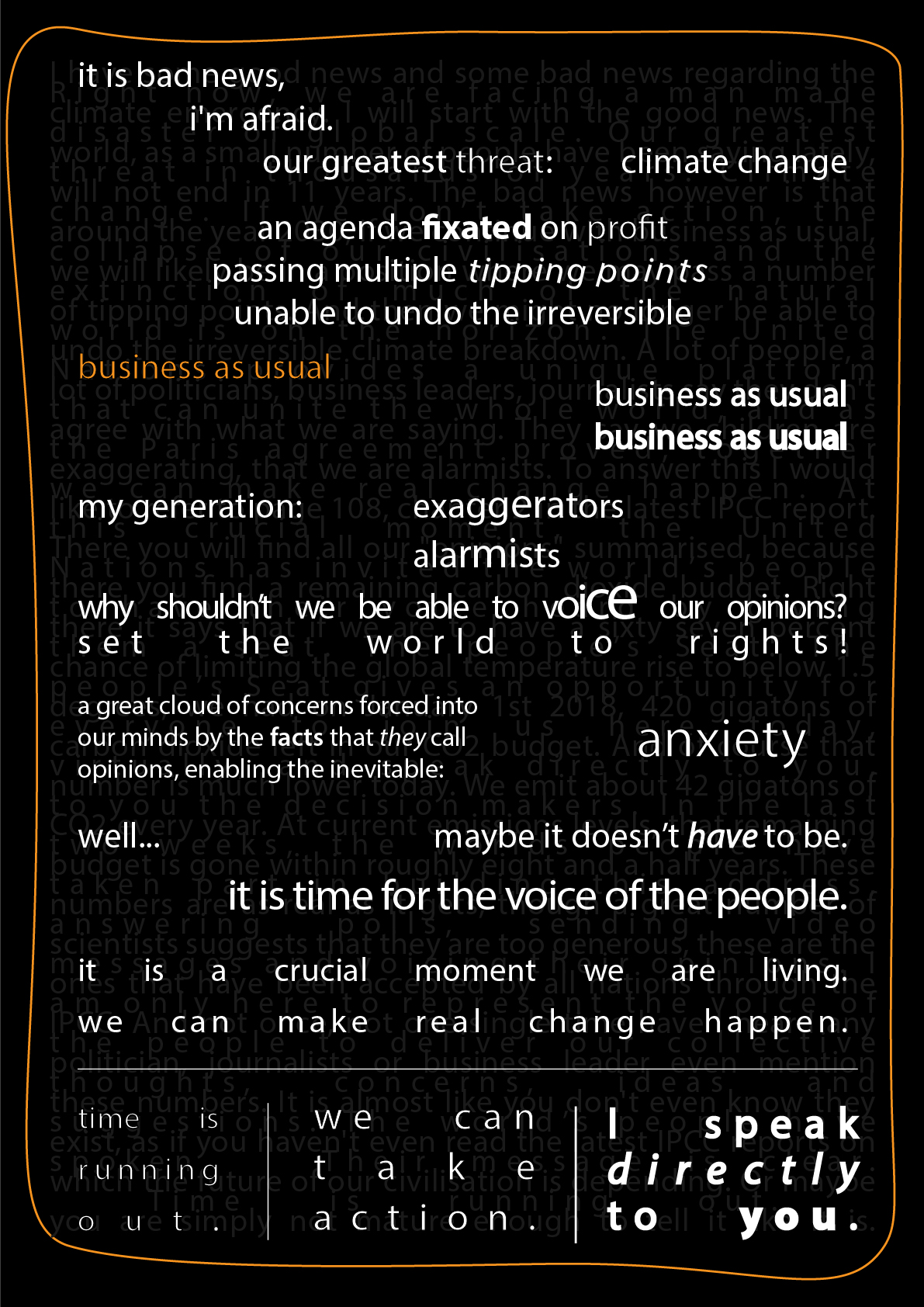 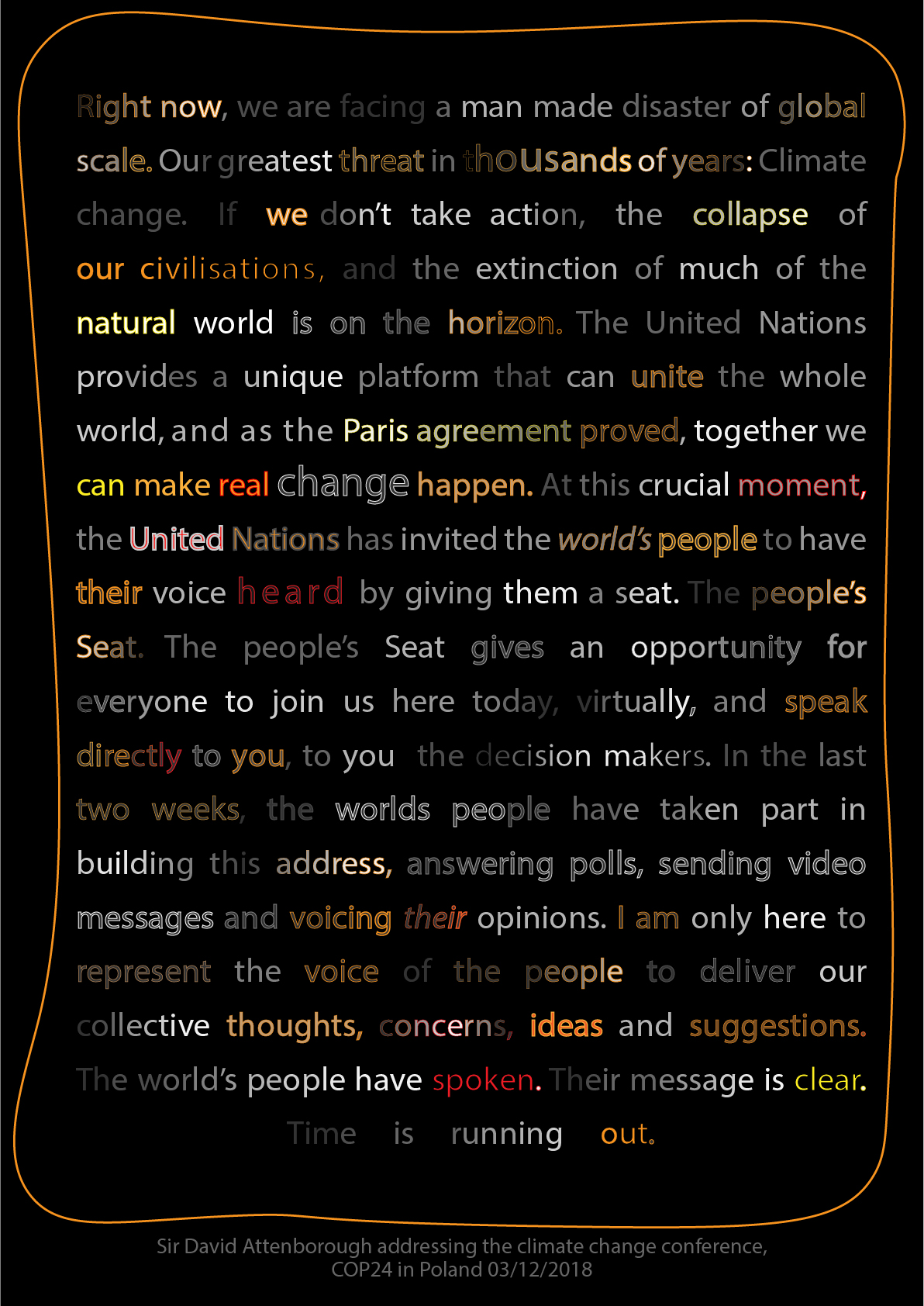 I have some good news and some bad news regarding the climate emergency. I will start with the good news. The world, as a small number of people have been saying lately, will not end in 11 years. The bad news however is that around the year 2030, if we continue with business as usual, we will likely be in a position where we may pass a number of tipping points. And then we might no longer be able to undo the irreversible climate breakdown. A lot of people, a lot of politicians, business leaders, journalists say they don't agree with what we are saying. They say we children are exaggerating, that we are alarmists. To answer this I would like to refer to page 108, chapter 2 in the latest IPCC report. There you will find all our "opinions" summarised, because there you find a remaining carbon dioxide budget. Right there it says that if we are to have a sixty seven percent chance of limiting the global temperature rise to below 1.5 degrees, we had on January 1st 2018, 420 gigatons of carbon dioxide left in our CO2 budget. And of course that number is much lower today. We emit about 42 gigatons of CO2 every year. At current emissions levels, that remaining budget is gone within roughly eight and a half years. These numbers are as real as it gets, though a great number of scientists suggests that they are too generous, these are the ones that have been accepted by all nations through the IPCC. And not once, not one single time have I heard any politician, journalists or business leader even mention these numbers. It is almost like you don't even know they exist, as if you haven't even read the latest IPCC reports on which the future of our civilisation is depending. Or maybe you are simply not mature enough to tell it like it is.

Right now, we are facing a man made disaster of global scale. Our greatest threat in thousands of years: Climate change. If we don’t take action, the collapse of our civilisations and the extinction of much of the natural world is on the horizon. The United Nations provides a unique platform that can unite the whole world, and as the Paris agreement proved, together we can make real change happen. At this crucial moment, the United Nations has invited the world’s people to have their voice heard by giving them a seat. The people’s Seat. The people’s Seat gives an opportunity for everyone to join us here today, virtually, and speak directly to you, to you the decision makers. In the last two weeks, the worlds people have taken part in building this address, answering polls, sending video messages and voicing their opinions. I am only here to represent the voice of the people to deliver our collective thoughts, concerns, ideas and suggestions. The world’s people have spoken. Their message is clear. Time is running out.